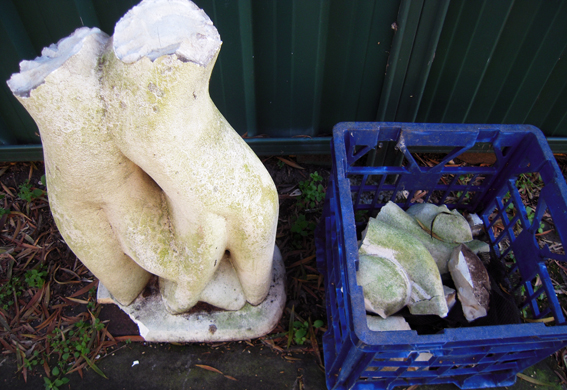 I like this one a lot because, in the words of the great Homer Simpson, it works on so many levels.

Consider the set-up. There is the broken statue, or at least the bulk of what remains of it and then, alongside it, placed deliberately and neatly in a blue milk crate as if commenting on or referencing the main hulk, there are the other smaller pieces of the statue randomly piled together. Brilliant. I’m sure I’ve seen something similar to this in a gallery somewhere – the tension of the sculpture dissipated, the perfect, unbroken surface of the artwork disrupted – nay, transgressed.

This was created by someone, this exquisite example of back lane installation work; despite what it may look like, this wasn’t just randomly thrown together nor out.

So what is it telling us? It seems to me that this death is itself a comment on the passage of time and, specifically, the moment when three different levels of experience intersect. There is the present moment, of course, the arrangement of the pieces, the contrast between the sinuous, jagged shape of the broken statue and the hard, straight edges of the milk crate. One is vaguely primitive, the other industrial; one suggests the unique, time-worn curves of a natural object, the other is mechanical and serial. Perhaps it is meant to represent the transition from a manual, craft- based society to the alienation of Fordism, one in which Art is smashed, crushed by the remorseless advance of capitalism.

The immediate present is my encounter with this death, existing in that instant, the arrangement of object and subject. But what of the past? Because surely that is being suggested as well, the previous existence of this statue when it was whole and unbroken. For this present moment to exist, the statue must also have come into being in an earlier state, unchanging and singular, like the Universe before the Big Bang. We can imagine that state – the present moment gives us enough clues as to what form the past took, suggesting possibilities for resolving the sculpture.

And if we can do that in the past, why not in the future as well? Surely, the fact that the broken sculpture is arranged in this way, with the main body alongside the broken pieces collected in a crate, is an invitation to recreate the past, to rebuild the statue (although there is also the tantalising prospect that the pieces are ‘not all there’, that we are being encouraged to embark on an endeavour that is inherently doomed to failure – like all art?).

There is the potential then for another, third sculpture to be created – born, destroyed and reborn. What would that third sculpture look like? Well, that depends on our intercession and transformation from observer to active participant. Do we simply recreate the past, restoring that which was lost, or do we create something new? And in doing so, perhaps dare to dream that what we create out of something broken may be infinitely more meaningful than what was destroyed.

Plenty to consider, indeed, from Dead Sculpture with Crate.