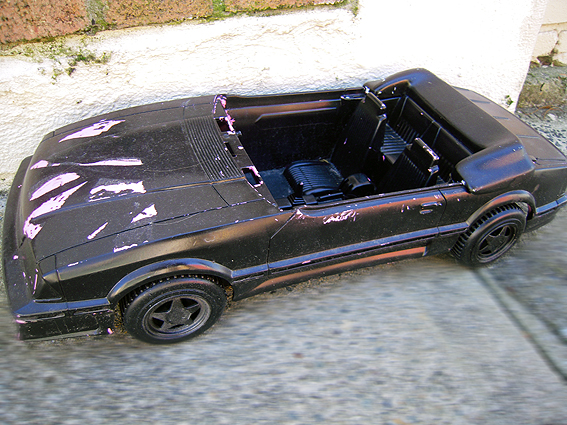 You know, the thought occurs to me that maybe all this writing about the abandoned detritus of our lives is just a tad obsessive.

I mean, what is it except an attempt to recuperate the excess, that which has been discarded, and tidy it away in a nice, neat blog? Despite appearances, it is not actually creating something new – not even recycling something old – merely incorporating that which has been cast off back into what already exists. There is no escape, even when someone tries to jettison whatever it is they were carrying.

It’s a sobering thought, prompted in part by this bashed-up miniaturised convertible. Cars are symbols of freedom, escape, the ultimate getaway. Even now, at any moment, this one looks like it could burst into life and career off down the street, a noisy, snarling fusion of pistons and wheel spin. It looks mean, this car, all beaten up, the windscreen missing, body work scraped, like something out of demolition derby or a post-apocalyptic road chase.

And yet it’s not going anywhere. It is parked, abandoned, waiting maybe. Waiting to be taken up again, re-possessed for one last spin around the block. It’s ready for the scrapheap but there’s always the chance that it can be rescued, salvaged, saved from the crusher; Herbie reborn. That’s the hope.

And then along I come.

There are a few ways in which I could incorporate this car. I could write about the fact that, somewhere, I still have some of the toy cars I played with as a boy, all bashed up and battered like this one, and that my son played with them as well when he was little. Toy cars have a durability, rather like dolls – I mean emotionally, not just physically – such that, for me, seeing one abandoned is always poignant.

Or I could relate the fact that I am a quite hopeless driver, slow and inattentive. A part of me dreads going out in traffic these days and I have a fatalistic acceptance of one day dying in a motor vehicle accident. Amazingly, it hasn’t happened so far. If I could give up driving, I would, except of course the convenience of having a car – curse them – even for a homebody such as I am, is undeniable. It means though that cars have a hold over me that is disproportionate to my interest in them. In the world of cars, I’m sitting in a lay-by, resting, watching the world go by; surviving if not reviving.

There are always stories that circulate in and around cars, the demands that they make, the pull they exert on us or just the emotional baggage they carry. The sense of freedom they invoke is this proliferation of narrative, the sense that anybody – properly licensed, of course – can go anywhere.

And then sometimes it’s just the wheels spinning, revving endlessly on the spot, obsessively, repetitively. Not. Going. Anywhere.