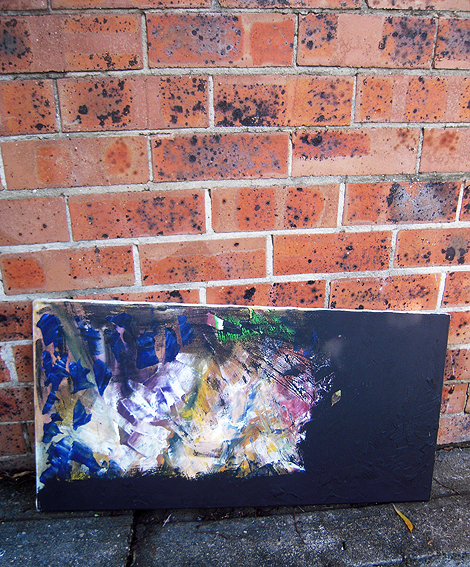 There is a sense in which Great Art never dies because its message is eternal and timeless and spans all ages blah blah blah… if you believe such meretricious baloney.

The fact is that Art belongs in the laneway. It’s the perfect place for it, propped up against a paling fence, slouched against a wall, ready to be recycled, re-used, re-appropriated in an endless exciting whirligig of circulation and dissemination. Instead of traipsing along to galleries and warehouses, how splendid it would be if our daily walks were lined with an ever-changing panoply of colourful canvases, delicate pen and ink drawings, perhaps the occasional collage.

Households would take it upon themselves to display art which best reflected their worldview or innermost thoughts, and we would be free to take up or simply contemplate this art as we wandered past. It would become a civic duty for everyone, once in a while, to create/curate a work of art suitable for disposal.

Some people might object (some people will always object) on the grounds of taste or artistic merit but then debate is always healthy. Except when it’s rancorous. Which it wouldn’t be because Art uplifts the soul and enlivens the spirit, and we would be literally wading through Art.

Of course, even now, it is possible to see Art everywhere (even in rubbish). This Art is rubbish though, which is not a comment on its inherent qualities but rather a statement of fact. This is abandoned Art, lost Art, homeless Art. Art which – to put it more euphemistically – has been set free.

It is Reject Art, work held in such low regard by its former owners – and possibly creators – that it finds itself unceremoniously dumped on the street. Every artist experiences rejection at one time or another – or they should – but rarely to the extent whereby their work is considered to be utterly worthless. Lying in the gutter, this is Art without any value, which is intriguing in itself because it is the purpose of Art to accrue value, whether it’s aesthetic, cultural, personal or monetary.

That’s what makes these items so arresting, because inevitably they beg the question as to what happens to Art when it has no value. Is it still Art if nobody – and I’m assuming there is nobody – cares for it? It looks like Art to me but it doesn’t seem to be functioning like Art. It’s Broken Art.

But then again, it is perhaps in questioning the very nature of Art, whether intentionally or not, that these items can best lay claim to actually being art.