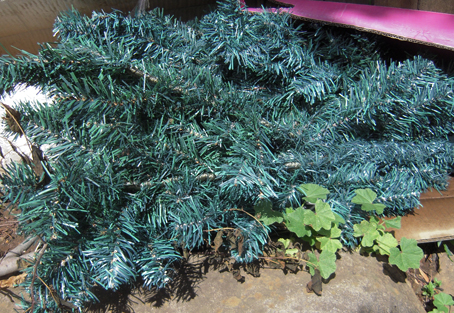 About a year ago, I kicked off this series with an entry about dead Christmas trees being put out in the lane for recycling.

There’s no prospect of mulching for this one, no wood-chipping or slow decomposition. This one is for keeps. It hasn’t been put out for recycling, a guilt-free discard in the knowledge that the dead tree will go on to do good things in the after-life. There is no after-life for this one; it was always already dead.

Perhaps it is only in death that its deadness, its deathnicity, really comes to the fore. In life, such as it was, the fake Christmas tree had a purpose, a raison d’être. We might know it’s fake but that’s OK; everybody knows you can get good fakes these days, almost as lifelike as the real thing, and even if it isn’t that’s OK too.

There’s less stigma attached to a fake today. We can enjoy it in a post-modern, ironic, non-religious kinda way; a fake says we’re not taking it all too seriously, can still delight in all the gaudy, tinselly effect without subscribing to the deadening hand of tradition. Some might even prefer a fake; fakes save trees after all. Good ol’ fakes. Plus a fake is forever, like a member of the family. You know exactly what you’re getting with a fake; a fake won’t let you down. Long live fakes.

But in death, all that good is undone; the chimera of life that clung to it during the festive season is ripped away and its true nature – or lack of it – is revealed for all to see. What were we thinking, idolising something that is so obviously dead? Were we blinded by our desire to breathe life into something that is forever moribund? Are we gods? No, what fools instead.

But hush, for there is some comfort we can glean from our absurdity. In all truth, as I am bound to say, this tree was not discarded in some postlapsarian, ex-yuletide slough of despond but rather was found in the lead-up to the festivities, before we all decked our halls (yes, I held this entry back for effect – forgive the base manipulation). And it didn’t last long in the laneway but was soon taken up, possibly to find a new home in time for Christmas, restored to its former bauble glory. For all we know, it could have found new life, re-used if not recycled.

A fake life, for sure, but sometimes even a fake life is better than death. 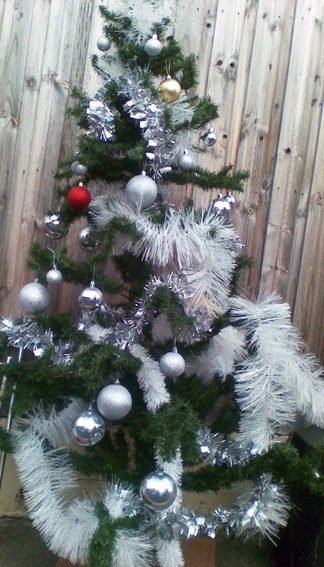 A fake tree complete with decorations. At first glance, there is something quite shocking about this apparition, the fact that someone, in their haste to dispense with Christmas for another year, hasn’t even bothered to de-decorate the tree before disposal. What is Christmas if it is not ritual: dressing the tree and then undressing the tree. The cycle of life.

With a real tree, it is as if we keep all that is precious and permanent – the shimmer and the sparkle – and throw off everything that is transient and decaying. There is the promise of renewal, the hope that, one day, we will once again unpack the baubles and tinsel, reconnect with all that is jolly and gay, while at the same time acknowledging that no-one is immortal, that death is an intrinsic part of rebirth (jeez, I should be writing sermons).

That doesn’t happen with fake trees. There is an awful logic to throwing out the glitz with the greenery. Why bother to keep the man-made ornamentation when the whole ensemble is fake? There is a totality here that refuses to discriminate between false nature and real bling (or vice versa)  – it is all one, the decorations merely an extension of the tree, the tree simply another ornament, indivisible, united in artifice.

So why hold onto one and not the other? If you’re going to throw things out, then let’s really THROW THINGS OUT. None of this keeping things back on the off-chance, in the hope, because you never know… Only then can Christmas really begin anew from scratch, re-imagined not simply recycled. 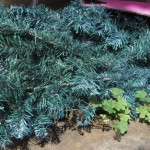 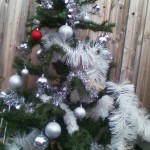 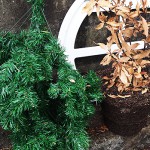 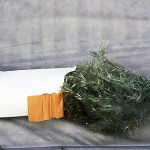 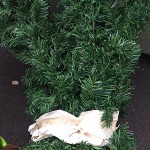 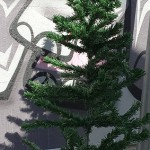