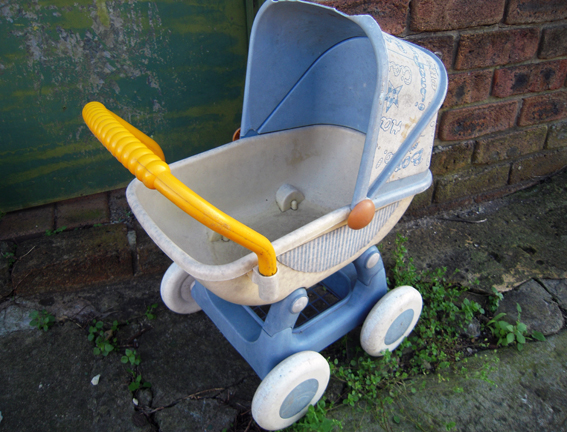 It’s an empty doll’s pram. I mean, the pram is empty, not the doll; the doll is just absent, not vacant. Feel free to fill it with memories and emotions, conjecture, a story line or two. It’s designed to be played with, to carry a load of make-believe.

Seeing an abandoned pram, it’s hard not to think of the Odessa Steps sequence in Battleship Potemkin, such is the cultural resonance of that film. Of course, that wasn’t a doll’s pram, it was a real pram, and it wasn’t empty, it was occupied, but still… it’s a powerful trope.

The first response on encountering a dead pram is obviously ‘Oh, baby’s grown up’. This is different though because it’s not the occupant of the pram that has moved on but rather the driver. A child who was playing at being grown up has actually grown up.

This brings into focus what is different about dead toys. So much of what is discarded signifies a failure. Something is broken. OK, maybe it is kept for a while but eventually it is dumped. The dumping represents a decisive change and a conclusion, the point of no return; the connection is severed. The very fact that the object is in the laneway suggests that a breakdown has occurred.

Toys are different. For a start, they may not be broken. They may simply be out-grown. So there is no sense of failure (disappointment, anger, frustration), just a handing on, a recognition that the toy no longer fulfils a need, not because it is stuffed (so to speak) but because the owner has matured. There is the sense of progress, of embarking on the next stage of development. And with progress comes a sense of nostalgia. Of course, we must grow up and put away childish things, but the corollary of that, inevitably, is a feeling of loss.

In a curious way, the emptiness of the pram, the missing doll, is us; what’s unsettling about looking at an empty pram is that we are looking at our own absence, a loss which will never be recovered and which, paradoxically, can only be understood by its presence. And that emptiness is vast. You can pour everything into this tiny carrier and it will never fill up, not enough anyway to replace what is no longer there.