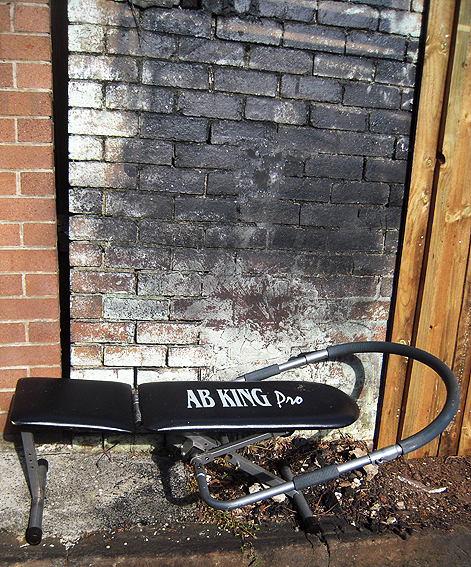 Look, I’m not going to say anything here. I think we can all agree there is simply no need. Discarded gym equipment has an eloquence all of its own. Anything I might add would simply be superfluous and trite in comparison.

Besides, if I did say something, which I’m not, there’s a good probability that it would come out sounding somewhat smug and condescending, along the lines of: “Just look at all this junk – have you every seen such a collection of useless, redundant crap? Lying abandoned in a back laneway is exactly the right place for all this rubbish. Pity the poor deluded fools who imagined that investing in the Ab King Pro might magically transform their lives and contribute something meaningful to their brief existence on this planet.”

And that would be wrong.

But why such glee at the sight of some sad sap’s hopes of an active and healthy lifestyle discarded in the gutter, dragged down to the level of the rest of us jeering slobs? After all, there is nothing risible about a person’s desire to improve themselves, to recognise the need for change and to act upon it. Perhaps it is because most of us who have thus far resisted the late night TV entreaty (“Call now!”) to summon the Ab King Pro into our lives recognise that there is something deeply exploitative about such sales pitches. They trade on people’s dreams of becoming somebody else – better-looking, fitter, healthier, richer, taller, brainier, more successful… more loved. They take these fragile yearnings and pump them up, twist them from side to side, turn them inside out and back to front before finally delivering them to the point at which a cheap contraption made of plastic and metal is the answer to everything.

Nobody needs funky specialised equipment to get fit. It doesn’t make it any easier, any faster or any more efficient. And if the reasoning is: “Well, I’ve spent all this money so that means I’ll actually use it” then the chances are the motivation is not sustainable and will soon collapse in a pool of doubt and self-recrimination.

The appeal of gym equipment is in inverse relation to its ability to deliver. It contributes nothing – nothing that can be achieved without effort and time, elements which don’t require gym equipment in order to exist – and yet it promises exactly the opposite, a short-cut to fast, achievable results; the less effort involved, the more appealing it is, and the greater its appeal, the more likely it is to disappoint in the end.

To that extent, there is something almost holy about these pieces of equipment. They are fallen idols, invested with so much hope and belief and yet ultimately doomed to failure because they cannot give us that which we cannot find within ourselves.