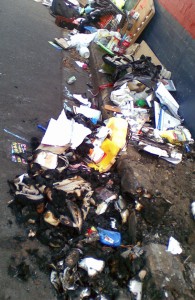 Round where I live, it’s quite common to find small piles of detritus left in the back lane as the result of people moving house. This is the residual, the bit that’s left over when people move from one place to another, like shedding a skin. It’s the stuff they don’t want to take with them to their new lives and, having nowhere else to put it, they leave it in the back lane, often quite carefully piled together like a small offering or a ceremonial leaving gift. Depending on the pile and its composition, the offering gets picked over by passers-by over time, much like a dead carcass is stripped clean by scavengers, its various components recycled, repurposed and re-used. Eventually what’s left over – broken, ugly and decaying – will disappear, presumably scooped up by the council on one of its collection runs.

Rarely though do you see a dumping on the scale and complexity of the one I saw recently in a nearby laneway. It looked as if an entire household had been vomited into the laneway, splattered against the side of a building. It was epic, surreal and more than a little disturbing. Extending perhaps 20 metres in length, it had no pretence to order or organisation – the way in which people will deposit their rubbish neatly – but was simply spewed forth in great confusion, household items and furniture mixed with food, kitchen utensils, clothes and personal belongings. It looked like the aftermath of a natural disaster. Somebody had even set alight to parts of it, adding to the confronting in-your-face feel of it all – not just dumped but burnt as well, as if jettisoning the stuff was not enough, it had to be destroyed as well.

Some of the items were typical of contemporary dumps – a broken suitcase, a discarded CD rack, old baby furniture and unwanted DVDs (always the ones that nobody wants) – but the one that caught my eye and seemed most poignant amid the overload (what is this if not an excess of narrative – we try to read into dumps the story behind them, what they tell us of the lives they inhabited – but here there is too much, in every sense) – was a set of discarded water colour paints, the tubes strewn about and flattened on the road.

Given the abundance of choice, why is this item so suggestive?

Maybe it’s a heightened sense of abandonment: other items are discarded because they are broken or have been out-grown or their contents exhausted (empty mayonnaise bottle anybody? Surely that’s merely bin-worthy?), but paints are thrown out when someone no longer aspires to being an artist. Maybe they were an unwanted gift in the first place, although typically they are then tucked away for a rainy day, kept in a cupboard in the faint hope that maybe, one day, there will be time enough to sit down and learn how to paint, to find out exactly what that person is capable of creating, out of boredom or curiosity about themselves, or simply to do something as gloriously useless as paint a water colour.

People need to do these things, or at least they feel as if they need to. Chucking out the paint signals a fairly decisive realisation that this day is never going to happen. Or perhaps it is a candid acknowledgement by the owner that they have no inclination nor desire to learn how to use them. Fair enough; why cling to foolish dreams or unrealistic hopes? If you’re never going to paint, don’t hang on to the paints as a constant reminder of the things you’re never going to do. How liberating it must be to dump them in the back lane and move on, free in the knowledge that water colour paints, like knitting needles, paper-making kits and foreign language tapes will never be required in the future.

Or maybe I’m reading this pile back to front. Just because the water colour paints have been left as rubbish, we assume that the desire to paint has been abandoned too. It ain’t necessarily so; perhaps the previous owner has moved onto oils instead. I didn’t see any of those lying around. All is not lost. 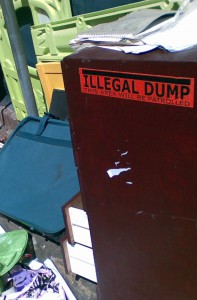