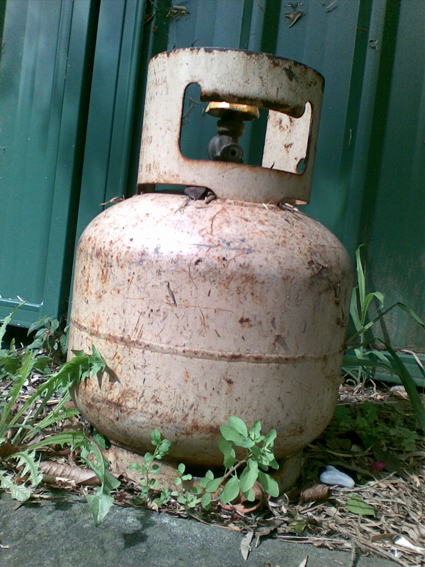 Admit it, there’s something a little scary about dead gas bottles. They sit there like unexploded bombs, all that self-contained power waiting to be released, instantly, unexpectedly. They could go off at any moment. Whatever they hold must be dangerous because it is constrained by so much heavy metal, a solid force field neutralising all that mysterious latent energy.

In reality, there is no mystery at all about the gases involved (LPG or helium – do not inhale) and, presumably, the canisters are empty anyway. Presumably.

Nevertheless, there is undoubtedly something different about these discards. There are established schemes for recycling and exchanging bottles – in fact, the whole domestic gas supply business is based on the constant circulation of bottles for carting about the actual stuff bought, the gas. As such, these schemes are regulated and controlled, fenced in with safety standards. There’s no such support with the backdoor bottles.

Many of the objects left in laneways are an invitation, however vague, for somebody to come along and take them up, to give the items a new lease of life, a new home. The laneway death is at the bottom of the pecking order in terms of the recycling of used items – below the classified ad, ebay or gumtree, after the garage sale. It is only a whisker away from outright dumping. In fact, in many cases, it is difficult to tell the difference. Recycling or refuse? – they look the same.

It is an anonymous transaction, one that requires no exchange, no direct contact between the parties involved. You don’t want to be seen dumping and I don’t want to be seen retrieving your rubbish. There are no questions asked and usually no information is given. Most of the time, this is entirely sufficient; ignorance is vaguely blissful and back lane browsing requires no specific skills or knowledge whatsoever. Just plenty of idle time and a compulsive-acquisitive behaviour pattern.

Gas bottles are a different kettle of fish, so to speak. It calls for a certain confidence (or bottle?) to pick up a bottle, not knowing what it contains or what sort of condition it is in. Caveat binner indeed.