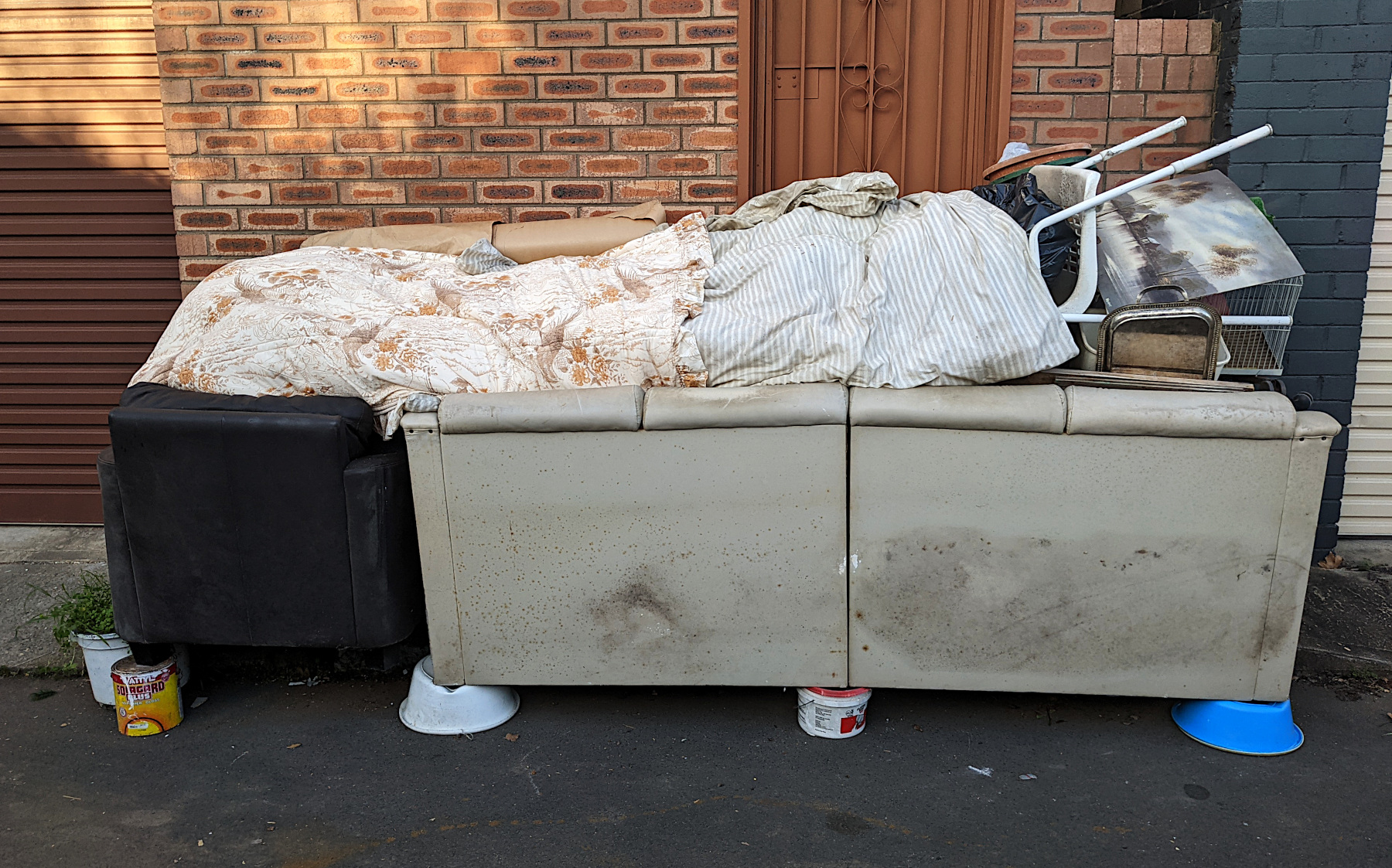 Week by week, the house down the lane is slowly being emptied of its contents.

There’s a house clearance going on down the street. Every weekend over the past few weeks, people have been in there sorting through stuff and, by Sunday evening, there’s a big pile of detritus stacked neatly in the laneway. Come Monday morning it’s all gone.

I’m guessing the old bloke who lived there has either passed on or moved elsewhere, perhaps into a home, and it’s fallen to the rest of the family to undertake the melancholy task of shifting through a lifetime of possessions. I’ve passed a few of the piles while out for a walk and they really are just the reconfigured remains of an entire house – carpets, chairs, pots and pans, some white goods, knick-knacks and trinkets.

Normally all this stuff would be distributed evenly and logically throughout a house or apartment but, here on the street, it’s condensed into the smallest possible pile. The conventional spatial relationships between the objects have been obliterated and the main organisational principle that applies here is to achieve a maximum quantity in the minimum of space.

Even so, it’s a lot of stuff. It’s only when you start to empty a house that you realise just how much they can hold; day to day, every thing has its place and we learn to live in and around it all but, empty it out onto the street, and suddenly it seems to magically expand and multiply, occupying more space than seems physically possible. A little rubbish goes a long way.

I’ve written about household dumps previously but that was in relation to a specific, quite spectacular disgorgement; more generally though, the mass household evacuation is one of the more common sights on the streets every week. People come and go, nothing stays in place for long. Perhaps there are noticeably more clearances at the end of the academic year when students move out, or during an economic downturn; there seem to have been quite a few recently which may be due to the fact that mortgage holidays and tenant eviction bans introduced in response to COVID-19 are now coming to an end.

All this stuff has to go somewhere; the quickest and easiest place is the street. 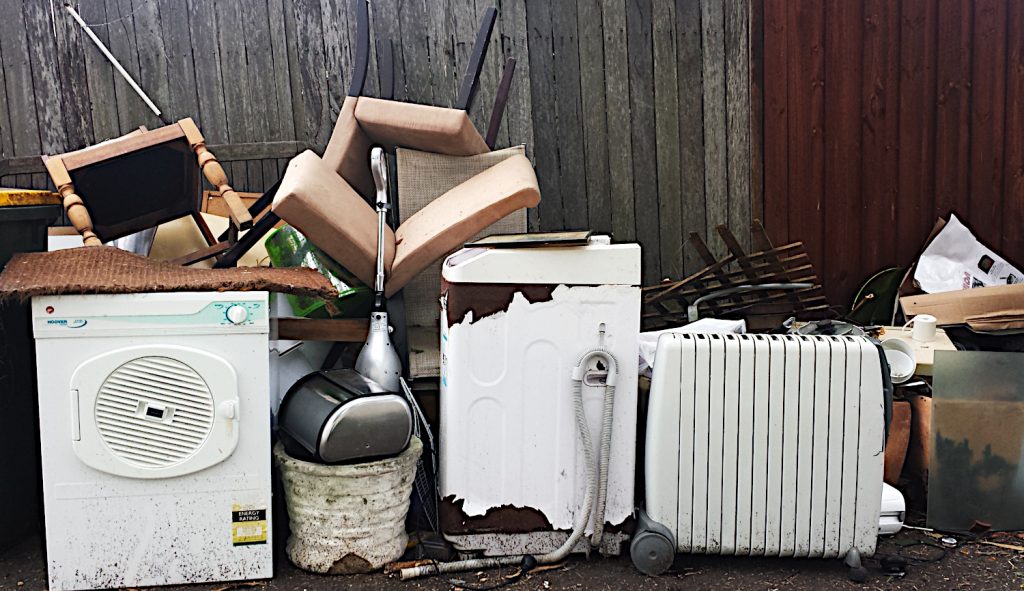 A certain kind of death

In common with other laneway deaths, each household clearance is unique in its own particular way while still sharing certain collective traits.

There will be a degree of disorderliness. That much is inevitable given the nature and quantity of the constituent parts and the speed with which they are often assembled – typically overnight. I’ve remarked previously how many solitary deaths are so neatly arranged, as if the perpetrator is loathe to draw too much attention to them. That is much harder to achieve with a household death.

Equally though, there is a sliding scale of disorganisation, ranging from stacked piles which show some degree of grouping and classification, compared to others which resemble actual trash heaps with no attempt to impose any degree of order (the rationale here seems to be that all this stuff is heading off to the tip anyway so why not create a mini version of it as a type of prologue, a precursor of what is to come? This line of thought has a certain logic to it, however confronting it may appear at times).

Sometimes the piles seem to start off fairly neatly – you can see the basic building blocks are in place – but become increasingly shambolic as more stuff is dumped until in the end it is all just being chucked on willy-nilly, a desperate wildness taking hold as the pile continues to grow. 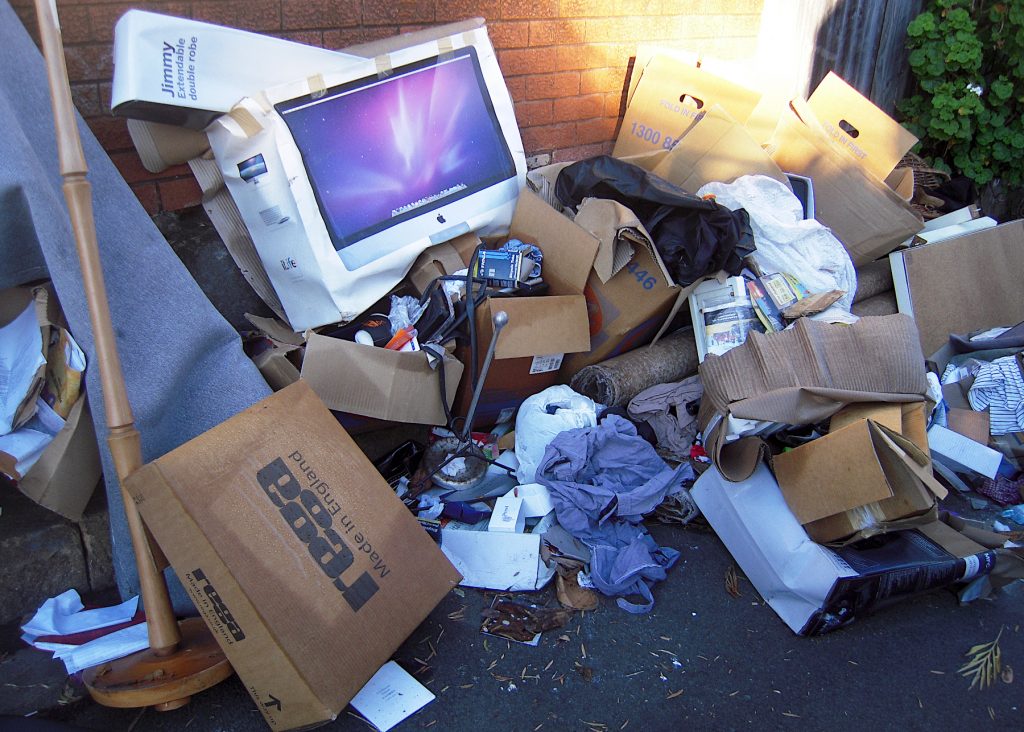 The content of each pile is practically limitless. Sure, you have your staples; sundry white goods, kitchen utensils, a screen or monitor of some sort, maybe a bed base and mattress too. We’ve all got those. But beyond what you might expect to see when a house is regurgitated, there is also often a certain je ne sais quo that catches your eye, a detail that causes you to stop and ponder life’s idiosyncrasies for a moment longer.

For instance, naturally there is general household waste, literally just the contents of the rubbish bin tipped out on a sofa, but sometimes there might be food too, such as cereal in a bowl, with milk, as if somebody just got up from the breakfast table that morning and thought, ‘Bugger it, I’ve had enough. I won’t be needing this again’.

It’s the same with certain clothes (underwear anybody?), toiletries, toys – abandoned personal items which suggest that somebody, somewhere, is travelling very light. Not a lot of baggage being carried there at all.

Toilet brushes always surprise me too. I guess I’ve tended to assume that toilet brushes belong with the toilet, that once they’ve been assigned to a specific seat they stick with it until they can no longer function usefully. Sure you could take a toilet brush with you – if you so desired – but, if not, why chuck it out? Just leave it with the fucking toilet!

I dunno. All these items highlight one aspect of the household death which, although common to all deaths to a greater or lesser degree, is particularly relevant here: there will be narrative. Or indeed multiple narratives. Truckloads of narratives.

When a house is turned inside out, it’s as if what was once spoken privately is now said out loud for all to hear. A one-off discard says something discrete about how somebody lived their life but a household dump says everything, indiscriminately and in public.

We see how the people filled their cave, how they ate and slept and exercised, what they wore, how they filled the long lonely hours, what they looked at and what gave them comfort. What they thought was important, what they kept until the time came to cast it aside.

There’s always a certain poignancy that comes from seeing how other people have lived, as if we ourselves are extended, dispersed, exposed, the value of everything we do or possess put into question. Why them? Why us?

The household clearance down the street recently included a whole load of pot plants. I could see them in the distance piled up against the back fence, including a rather nifty-looking Swiss cheese plant.

Hmmm, I thought, I might just walk down there and take a look, being partial to a bit of Swiss cheese plant if it’s in good shape.

When I got there, however, I saw that all the plants, including the attractive Swiss cheese plant, were fake. Not a living thing amongst them. They were dead plants already, and now they were dead things on their way to the tip.

I didn’t want the Swiss cheese plant then because I knew that it was already lifeless, however splendid and realistic it might look. I don’t need fake life.

But for a moment, before I retreated empty-handed, I stood and wondered what it might be like to live in a house full of fake pot plants, knowing that they will never change until the day comes when you’re no longer there and there’s nobody left to look at them.