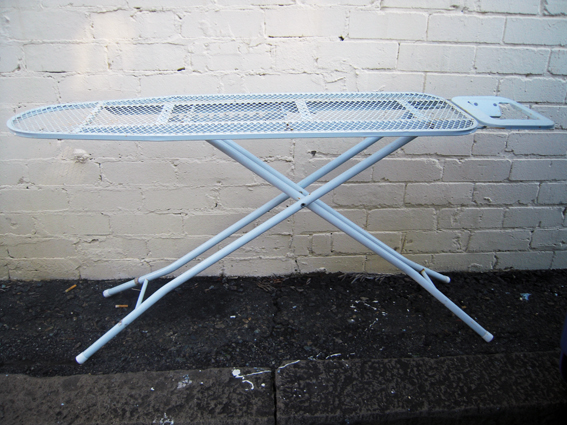 It is remarkable the number of household chores – decorating, gardening, sewing, cooking – that have been transformed into lifestyle hobbies, tasks that people willingly take on for their own amusement, and yet there are still some activities that resist renovation, that refuse to be incorporated under the rubric of self-improvement.

Ironing is one such activity. When John Osbourne’s Look back in Anger premiered in 1956, the task of ironing performed onstage was a visible metaphor for the conformity and dreariness of post-war Britain, the shackle of domestic tedium against which the angry young men chafed (although it was the women who did all the ironing).

Nothing much has changed. Ironing is still viewed as the antithesis of a free spirit, a symbol of civilised enslavement.

The electric iron was patented in 1882 but the first Ironing Table specifically designed for the purpose of ironing clothes arrived much earlier, having been patented in 1858. Prior to its invention, the practice of ironing involved putting an actual board on a table or across the backs of two chairs. According to the patent application, “when it was required to put on or take off the garment, the board had to be held in one hand while the garment was handled and managed with the other.”

I can understand then why the invention of a device specifically designed to facilitate the activity of ironing must have been greeted as a huge leap forward in mankind’s well-being. We should thank our lucky stars.

And yet the iron and its companion, the ironing board, remain two of the most reviled pieces of household equipment. Other domestic appliances are painted as being ‘liberating’, freeing the housewife from the toil and drudgery of manual chores (although the reality may be very different) but the iron symbolises ‘captivity’, being ‘chained’ to the ironing board as if to a yoke.

Consider all the human endeavour expended on trying to get out of doing the ironing; not just the usual evasions and half-hearted self-justifications (and not forgetting the vast sums of money spent at dry cleaners getting somebody else to do it for us) but also developing new fabrics, styles and types of clothing all designed to somehow convince us that a neat fold or time spent on a clothes hanger is an adequate substitute for a hot iron.

It won’t wash, so to speak. A crisp shirt or blouse, the knife-edge pleat or crease, still speak to us in ways that crumpled clothing cannot match. Ironing is a test of character, a gauge of our moral fibre and self-worth. Are you an iron man or woman?

I had an idle thought, call it fanciful if you wish, that all the discarded ironing boards on our streets – enough, surely, to constitute a plethora – are due to the growing army of people declaring, “Enough! I refuse to spend any more of my time de-creasing items of clothing. Henceforth, I shall go rumpled.”

Fanciful indeed. More likely, these boards have simply been worn out through years of heavy, repeated pressing, jettisoned when the burden of being both support and anchor proved to be too much to bear.