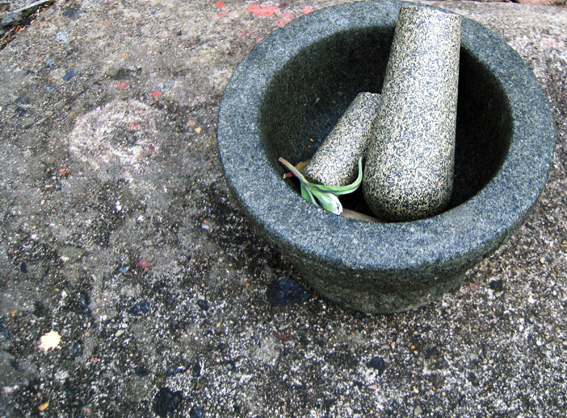 Is it safe to say that this item has finally ground to a halt? Safe but, perhaps, not wise.

The thing that strikes me about this death, and which, in its own way, is a small triumph, is that I don’t think I’ve ever seen it before. I cannot recall ever having previously seen a broken pestle. Maybe a mortar somewhere, cracked into pieces, but a pestle? It’s not your everyday sight. There must have been some heavy-duty grinding going on. A serious trituration indeed.

Whatever was happening, it was a clean break, the pestle snapped in two like a magician’s broken wand. Now the two halves lie snuggled together, a parent and sleeping child, in their smooth, stony sarcophagus.

There’s always a whiff of hope attached to these discards, as if, by being abandoned on the street, someone will come along and perform a miraculous restoration to health. In this case – as in many others – it seems entirely implausible though. As far as I am aware, there is no diy method for melding stone unto stone, no knack for re-establishing the tight bond that existed previously in the rock before the two halves were rent in twain.

I guess you could always use glue or a cement of some sort but then there would always be that granule of doubt as to whether or not the pestle would hold. During which subsequent episode of pounding would the fissure re-emerge, as indeed it must, tragically, inevitably? What God has put asunder, let no man join together.

Which leaves just the mortar. It’s ironic, on some level, that the same word is also used to describe a mixture for joining rocks and bricks together. Oh how this mortar must wish it were so! Instead it can only lovingly hold its broken partner, stoically restrained and dignified, forlornly aware that a mortar without its pestle is merely a bowl. Such is life – and death.