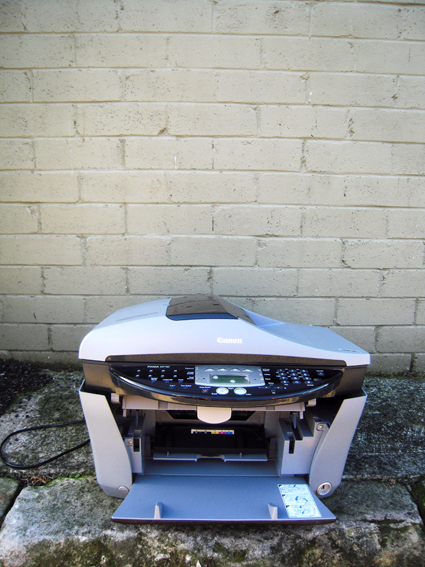 They are the embodiment of ‘built-in obsolescence’, not simply through the use of cheaply-made parts with all the life expectancy of a soap bubble but also by being deliberately programmed to stop working after a certain number of prints. This is what constitutes ‘programmed obsolescence’.

For a while I used the very handy SSC Service Utility software to prolong the life of an Epson printer long after it was telling me that its ink cartridges were simply exhausted and the printheads cactus. Eventually the print quality did deteriorate irredeemably but, by that stage, I had doubled its lifespan. Unfortunately the utility doesn’t work with my current printer.

Home printers crystallise the disjunction between the promise of capitalism and what it actually delivers. The promise is one of freedom for us all as autonomous individuals, a dream encapsulated by the ability to download and print out whatever we like, whenever we like, at our convenience. In reality though, this results in the individual doing more work for no recompense on behalf of governments and large corporations. People willingly take on their own slavery – which is, after all, the ideal capitalist outcome.

Whenever you see an organisation spruiking the ‘convenience’ of being able to print out at home something which previously needed to be sent out (bills, statements, tickets, application forms, terms and conditions etc), this is a sure sign of cost-cutting. Or rather cost-shifting as the consumer must now bear the cost in terms of in time, labour and consumables. In effect, the consumer agrees to do the corporation’s work for free.

When this promise of freedom, convenience and autonomy is linked to claims about helping the environment – save paper, save trees, reduce greenhouse gases etc – the disjunction is even more perfidious.

The argument goes that by giving people the choice as to whether to print or read on-screen, the total number of pages printed will be less, thereby reducing the overall environmental impact of a document.

In reality, desktop printers are much more inefficient compared to commercial printers, to the extent that simply printing one page at home will consume more electricity than printing dozens of pages on a commercial machine. And that’s not taking into account the resources that go into making a desktop printer, the wastage involved in its ‘programmed obsolescence’ and the fact that they often end up in laneways and landfill. In contrast, commercial printers are usually retrieved by the manufacturers and all the parts recycled.

In recent years, there has been a drop-off in global sales of ‘hardcopy peripherals’ (which includes printers), in part due to the shift to tablets and smartphones breaking the nexus between PC and printer. There are also schemes in place to help keep these little grey miscreants off the streets, collection points where they can be corralled, which may explain why fewer of them seem to be appearing in back alleys these days.

Occasionally though they still pop up unexpectedly, like stumbling upon abandoned alien space probes, mouths agape, silent and inert.