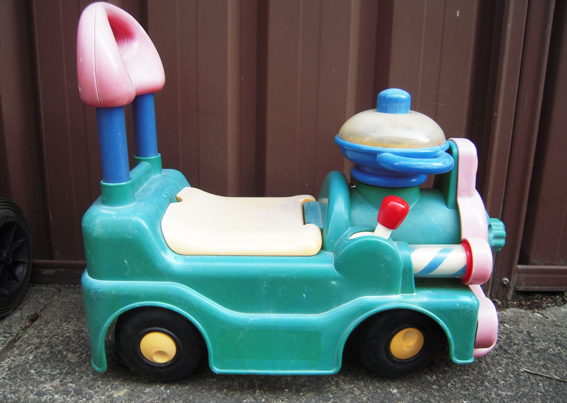 I love these discards; broken, worn-out, grown-out. Partly it is the cuteness; the chubby bodies, the tiny monster wheels (if that makes sense), the knobbly controls and handles. Cuteness is all about disproportion – the gangly legs, the over-large eyes – that somehow confounds our expectations without appearing too disturbing.

Partly too it is the colours and the fact that they are not just bright but also faded, weathered, worn. It’s odd to think of a mass-produced plastic toy having patina, but that’s what it is – the surface rubbed smooth by too many trips up and down the garden path, the colours washed-out by long days and nights left outdoors to endure the elements (although some of them look as if they have just rolled off the ride-on production line, barely rolled in fact). Abandonment is fundamental to the life of a toy – as these bears can confirm, and this one, and this one.

Ride-on toys are like facsimiles of machines, many times removed. There’s just enough of the basic elements remaining – the wheels and handles etc – to remind us of a real machine without ever fooling us into thinking that these might actually work as machines.

Imagine if they did though. Imagine if everybody got around on personalised carriers pimped with bold, primary colours and big wide seats. I reckon there would be fewer road rage incidents. It would hard to take anybody seriously if all our vehicles were made of pink plastic with orange wheels.

But isn’t that just it though? The extravagance of ride-on design highlights just how dreary most cars look – grim, dull, unexciting. Grown-up. No room for frivolity or fun – leave that to the clowns and kids, or the occasional Variety bush bash.

Thinking about this particular hobby horse, so to speak, brings to mind a faded memory: a deserted beach, racing along on a quad bike – bright red, big tyres, wide seat – leaving tracks in the wet sand, a passenger on the pillion leaning in close, being foolish, having fun…

Ah yes, where was I? I know there are people who will regard these toys as trash – just cheap plastic, a symptom of a throwaway society. Much better to buy a solid, well-made wooden toy that will last. I know, I’ve trundled down that road myself. Wood has such a lovely warmth to it. Much more sensible. And grown-up.

There’s a beauty about these abandoned toys though, born of an innocence which sees it as perfectly acceptable to love fluoro-coloured tyres and a big red steering wheel, and heightened by the poignancy of being so easily discarded. They are the transient relics of a moment in time that passes almost before anybody can register the pure sensory pleasure of it.