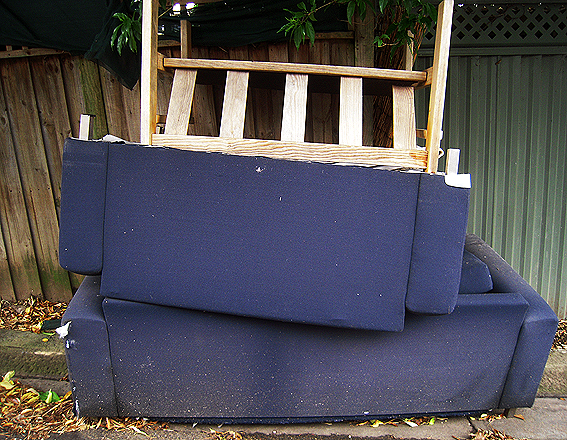 There is one imperative when it comes to the disposal of sofas: they must always be placed at an angle – albeit an angle of varying degrees. Sometimes the placement can be almost vertical with the sofa hoisted onto its arm end; often it is sloping slightly forward as if the last action of the dead sofa was to tip off a sleeping cat. Whatever the final resting place though, it is comparatively rare (at least compared to other deaths) to find a sofa on the level, simply placed as if it just happened to find itself in an outdoor lounge room.

There’s an obvious reason for this; the sofa is probably the biggest single dump that anybody will ever make. They are a big ticket item and, as such, they take up a lot of space. Moreover, there’s not a lot that can be done to diminish the mass of a dead sofa. They can’t be folded in two or stuffed inside a cardboard box. There is a irreducible physical presence that is difficult to ignore. They are the blue whales of the dumping eco-system.

Hence, I hypothesise, the desire to minimise the dead sofa’s footprint by positioning it in such a way that it takes up the smallest amount of lane space. This is one of the quirks of the laneway death, that people are prepared to dispose of their unwanted items in public, effectively despoiling their own environment, but when they do so, perhaps with a pang of remorse, they endeavour to do it neatly.

Of course there are plenty of discards which look as if they have been jettisoned through the window of a passing train but, equally, there are many more which appear to have been carefully and thoughtfully arranged. From our perspective, that is a very good thing, particularly when it comes to sofas.

The result is that sofas are typically positioned with rather more regard for their environment and the space they occupy. There is something almost sculptural about the manner in which they ‘made new’, repositioned in response to what they are physically rather than what they are functionally ie things to sit on. In death they become impromptu art installations (one of them here is even placed on a plinth), finally assuming their full form and specificity.