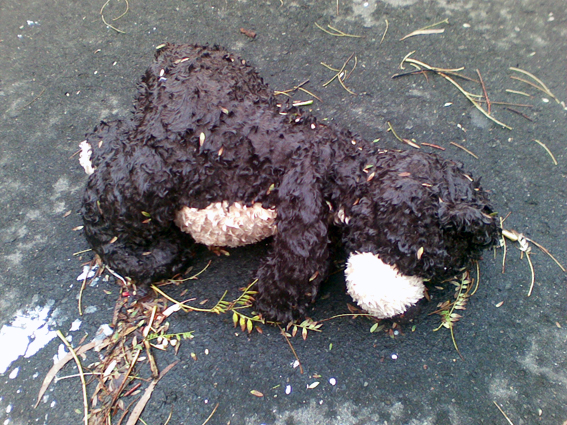 What’s going on here? I was mildly shocked to discover a cache of dumped teddies not so long ago and now here’s another one, a lone lost teddy left out in the laneway. Is this a new social phenomenon, like granny dumping, a response to the pressures of living with too many teddies and the realisation that there is simply not enough room for them all? Maybe attics these days are not big enough to store them all or perhaps we are over-indulging in teddies. Our teddy collecting habits are out of control and, inevitably, there are casualties – innocent victims of our sentimental infatuation with stuffed animals.

There’s something different going on here though. Whereas the other teddies were definitely dumped, this one looks lost, like a castaway swept up on a distant shore. He’s been lying out in the rain for a few days and his fur is matted and sodden. He looks as if he tried to get up at some point but, lacking the strength, simply collapsed on the spot, too exhausted to move. I was tempted to see if he could be revived but, in my heart, I know it’s too late. All that can be done now is to move him out of harm’s way and hope that whoever lost him will retrace their steps and reclaim him.

How did this happen? All too easily, as we know. It only takes a momentary lapse in concentration, a split-second distraction, for teddies (and other toys, let’s not forget them too – Lego, cars, Star Wars figurines – they’ve all gone this way) to slip out of sight. The whole Toy Story franchise is built on that anxiety, the fear of being lost and left behind, either through carelessness or the inevitable passage of Time.

Acceptance of lost teddies is a fact of life. It may sound brutal to say it but I lack the means – emotional and philosophical – to offer any other consolation. We can mourn and move on because, inevitably, there will be other teddies just around the corner.

(Actually, in case you thought that last sentence was too depressing, there were no other teddies around the corner. I’m thinking – hoping – this might be an isolated dead teddy incident.)