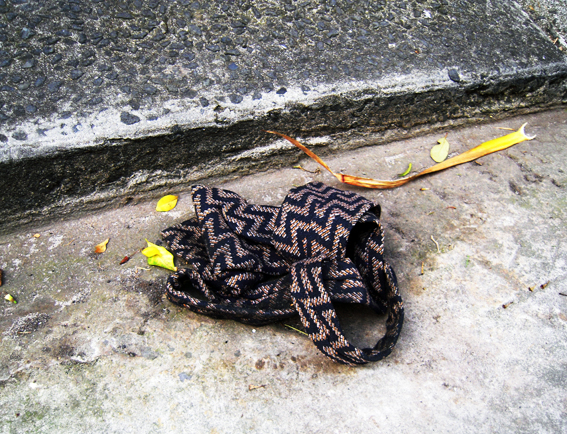 There was a moment, no more than a nano-second, after I came across this dead tie when I imagined it might be moving.

Something about the pattern and the way in which it has been coiled immediately suggested to me that it was a snake, lying in there in wait, silent and all snake-like. There was a pronounced frisson (pronounced free-sohn), a heartbeat of more than usual curiosity, and then the rational part of my brain kicked in; sleeping snakes in suburban side streets are about as common as, well, ties.

It’s not often I come across dead things which, in the initial moment of the encounter, make me think they are actually alive. Usually the fact they are lying in the laneway, exuding that peculiarly pervasive air of neglect, is a sure sign that they have been left to fester.

A solitary, neatly-placed tie in the gutter. Not something you see every day – which is, perhaps, surprising. The casualisation of the workforce typically refers to the increasing use of casual labour in place of permanent employees but it could just as easily refer to the dressing down, so to speak, of the male office worker. In common with many of my generation and before, when I started working in an office, wearing a tie every day was de rigueur. Now I wear a tie maybe once or twice a year. Businessmen and bankers, presidents and pastors are also regularly seen open-necked although, apparently, the GFC did cause a spike in tie sales as worried office workers thought the better of not sporting a half-windsor.

So where are all the ties? Not in the streets for sure. I could wear out my casual loafers roaming the laneways before I came across another tie like this. You might expect to find drifts of ties clogging the gutters but, no, not so. They’ve been stuffed into bin bags and left on Op Shop doorsteps. That’s where all our ties have gone, thick and thin, plain, striped and novelty.

This lone laneway tie is the one that got away, the tie that refused to be tied down.