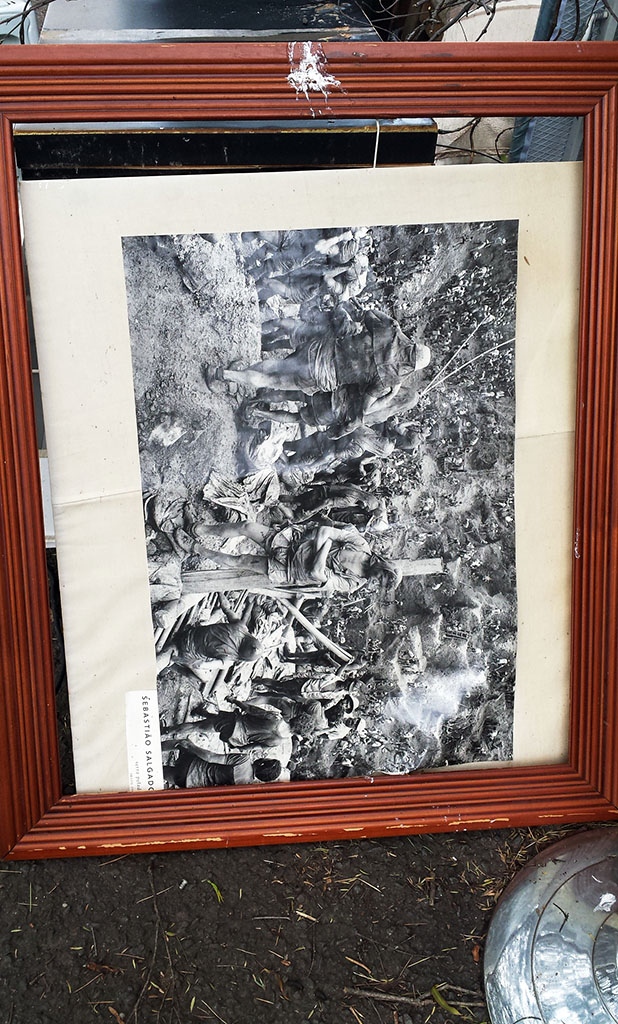 It seems somewhat appropriate that this print – stained, creased, abandoned in a broken frame with bird shit on it – is from Sebastião Salgado’s series of photographs taken at the Serra Pelada gold mine in Brazil.

Salgado’s photographs from the 1980s captured the madness and human folly of the mine’s operation which, at its peak, drew thousands of prospectors and workers who toiled in appallingly dangerous conditions.

I remember seeing the photographs in the late 80s and being struck by how Salgado managed to compose such chaos into a series of shocking tableaux, and also how he was able to aestheticise the experience, creating such beauty out of the horror and deprivation of the miners.

In spite of its many fine qualities as a photograph though, it seems odd to me that, other than as a historical reference, anybody would want to keep and display such a picture. Why would you want to put this on your wall and look at it every day? Unless it is to be constantly reminded of humanity’s callousness, greed and disregard for the lives of others.

Salgado captured the disposability of human life in the most desperate of conditions, exposing the waste involved in feeding the demands of a consumerist society. He highlighted the terrible by-products, both human and environmental, that are the consequence of untrammelled consumption.

It is fitting then that this photograph should be found here, lying amongst all the other detritus of the street. This is where it belongs, a poignant reminder of a throwaway culture at work, from a gold mine in the jungle to the suburban back lanes.