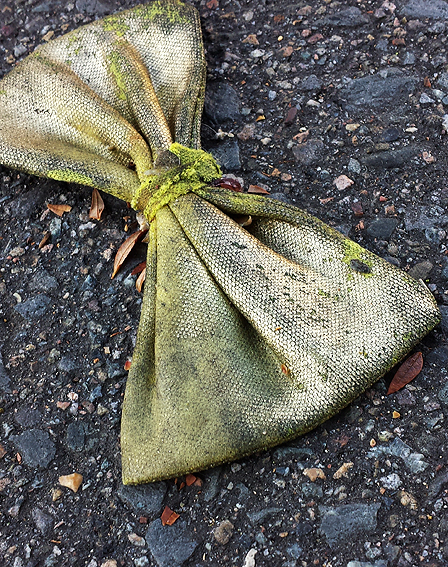 This crushed, damp, bedraggled little item lay in the middle of the street for a time, getting routinely squashed by passing cars every day, all the while, remarkably, retaining the faint vestiges of a shimmer and a shine. It is a model of fortitude and stoic resilience.

Once upon a time this would have been an adornment to some thing or some one, existing purely to catch the eye. A bow says frippery in the same way that a tie says conformity, utterly useless except as decoration. When you want to stand out, you go the bow.

Now it looks like a rather small sad sack. Bowed but, perhaps, not broken.

It’s hard to imagine the circumstances under which an old bow might end up lying discarded in the street as if it fell from the sky. Was it discarded or was it lost? Here we wander into the foggy territory of motive and intentionality.

If I wanted to relieve myself of a gold bow – or indeed any old bow I might have lying around – I’m pretty sure I wouldn’t leave it in the middle of the road just like that; it seems like a odd place to dispose of anything, let alone a lamé bow.

Do people driving along intermittently and randomly chuck unwanted bows out the car window? Knowing people as I do, there’s a part of me that hesitates to say definitively, ‘No, of course not’. And yet it seems unlikely.

Dead bows are too rare an occurrence to be deliberate cast-offs.

If it were a habitual practice then the chances are we would see many more abandoned bows lying in the gutter. Then instead of walking down the street and going ‘Ooo, there’s a bow’, we would merely glance at it in a cursory way as one does with a old newspaper or broken chair. But we don’t.

And so it seems more likely to have been lost. Perhaps it dropped off a ball gown after a memorably energetic night of dancing and wassailing. Perhaps it formed an essential element of someone’s soft furnishings and was inadvertently dislodged in the process of moving. Perhaps – and I’m fishing here – it was part of a toy or a baby’s plaything that was tossed aside in passing, as they are, fort-da and all that.

If any of those scenarios were true, the bow itself doesn’t seem to have been missed because it lay undisturbed in the street for a fair while without anybody coming to reclaim it.

And then eventually, like so much else, it was gone.