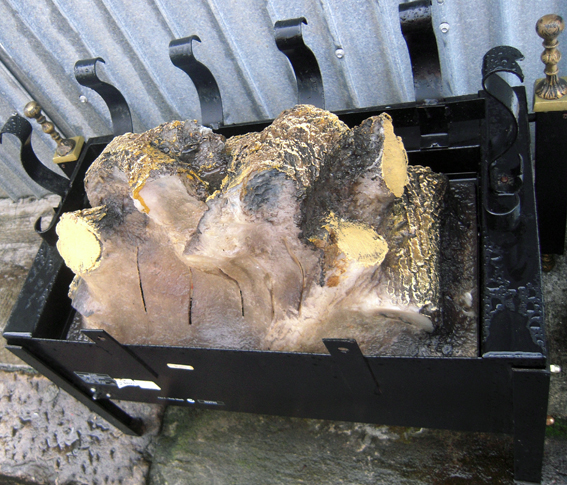 The fire’s gone out but the logs live on…

How many fake trees were chopped down to make this fake log heater? It’s a good question and one well-worth considering in depth because a growing number of people are concerned about the destruction of pristine fake forests for use in fake fires (gas or electric) thereby contributing to the release of fake greenhouse gases and threatening the habitat of endangered fake wildlife.

We’ve looked previously at what happens to fake Christmas trees and I believe there are now pilot schemes being considered that will convert discarded fake Christmas trees into fake log fires, thereby reducing the need to harvest fresh fake trees. There are also certification schemes in place to ensure that fake logs are only sourced from fake forests that are managed in a sustainable manner using fake plantation trees. Of course, the biggest issue concerns the growing trade in illegal fake logs from some of the most environmentally-sensitive fake forests on the planet where there is little or no control over the activities of fake loggers.

The good news for anybody thinking of using a fake log heater of this type is that once the fake logs (preferably from a certified source) have been put in the fire then that’s pretty much it for a lifetime. Unlike real logs, fake logs never burn out and hence don’t need to be replaced with new fake logs. Over the course of several years, that’s a considerable saving in fake logs.

In fact, what usually happens – as appears to be the case with this heater – is that the fire itself will burn out long before the logs do. Even so, that needn’t spell the end for a fake log heater. I have many happy childhood memories of those evenings when our family would gather around the fake log heater with the heat turned off just to enjoy the comforting glow of the fake flames as they licked around the edges of the fake logs. Somehow the effect made us all feel a little warmer inside even though we knew it was only a fake feeling.

Today, electric fake log heaters have lost a lot of their popularity due to the growth in fake gas fires which are regarded as being more efficient fakes. Indeed, I have a fake log gas fire in my lounge room that looks so real that whenever I see a real fire now, I have to remind myself that it isn’t fake.