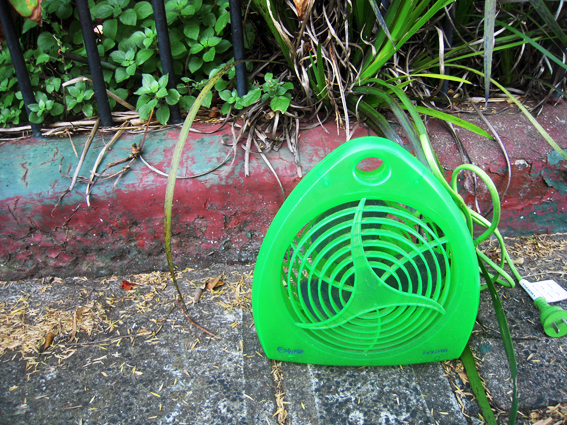 Plucky little fan heaters are further casualties of the winter months when, along with oil heaters, they are called into action, their tiny motors and heating wires pushed to the point of overload.

Fan heater death is always a puzzle to me. Why, oh why? They are such simple creatures; shaped like single-cell organisms, they suck in air from one side, pass it over a glowing element to warm it up and push it out the other side. That’s a fairly basic physiology; suck in, blow out. Rather than filtering out nutrients, they remove the chill and excrete a warm by-product. They have so few parts – usually just a motor, the fan, heating element and maybe some sort of thermostat or cut-out device – and are distinguished mainly by the individual patterns of their vents. What could go wrong?

And yet there is something almost inevitable about the premature demise of a fan heater. They have a limited life expectancy and, from the very moment they are pressed into service, we seem to be waiting with glum foreboding for that moment when they expire. Typically this is signalled by the absence of the warming red rosette indicating that the element has given up the ghost; the blades still turn but the heat is gone. I wonder how many fan heaters, in this scenario, have won a reprieve as mini cooling fans but, in reality, they are ill-adapted for such use. Heat is their raison être and, in its absence, they must inevitably find their way into the lane.

From time to time in the past, I have been tempted to rescue these small souls from the gutter. I belong to that school of mechanical repair which believes any device can be dismantled and reassembled and, in the process, this will be sufficient to restore it to health. It’s akin to a surgeon opening you up, removing all your vital organs and then putting them back, stitching you up in the hope that it will cure you of all ailments. Needless to say, I have had limited success with such a methodology although, strangely, that has done nothing to dispel my faith in its efficacy.

With fan heaters, it is all the more galling because their internals are so simple and easily disassembled. What on earth is wrong with them and why don’t they respond to my ministrations?

That is why fan heaters continue to baffle and beguile me. Although my perplexity could no doubt be easily dispelled by means of acquiring some fairly rudimentary knowledge of electrical components, I doubt very much if that will happen. Rather, the dead fan heater will remain an alluring enigma to me, elusive and mysterious.